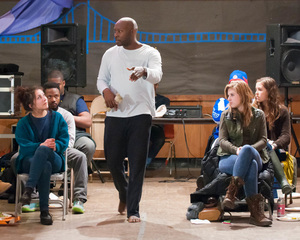 WE ARE HERE @ Cass Commons/ Detroit University of Michigan: Speakers Series Photo By John Diehl
​Antonio David Lyons is the founder of We Are Here, a social sculpture project that seeks to foster an environment where the arts can impact social conditions, attitudes, perceptions and structures. The campaign was birthed in Johannesburg, South Africa in 2010. It utilizes discoursive play to engage men and boys in themes of gender violence, identity, relationships and HIV/AIDS. The goal of the campaign is to provide a nurturing environment where men and boys can discover, develop and share tools that will help grow themselves and their communities.

He holds an MA in Applied Theatre from the City University of New York (CUNY). His thesis project The WHY Factor was conducted in collaboration with CUNY/BMI (Black Male Initiative). The project provided concrete opportunities for participants to practice different ways of being successful while developing useful skills for navigating life. In addition to his studies Antonio continued to integrate his artistry with social activism while working at the Creative Arts Team (CAT), an educational theatre company that specializes in creating interactive learning experiences with youth and adult populations. The scope of his work within the organization has allowed him to devise and implement curriculum that addresses bullying, college preparedness and conflict.  He was also instrumental in shaping Project CHANGE, a CAT program that trains undergraduate students in utilizing theatre based interventions, social media, community development and Evidenced Based Intervention (EBI) curricula to engage community around healthy sexual lifestyles.

He has been a Guest Lecturer at the University of Michigan (Ann Arbor), Wits University (Johannessburg), Columbia College (Los Angeles) and the Newtown Film and Video School (Johannesburg). He is also Chair of the newly formed Black Theatre Commons.

Workshops/Performances of We Are Here have been presented at:
Awards | Fellowships | Residencies